A new, collector’s edition of the historical pamphlet Czy Polacy wybić się mogą na niepodległość? [“Can Poles win their independence?”] has been published by the National Library of Poland. It comprises two volumes housed in an elegant, hand-made case, the first a facsimile of the original version, the second a booklet with essays on the historical background, rhetorical style and meaning of the text. 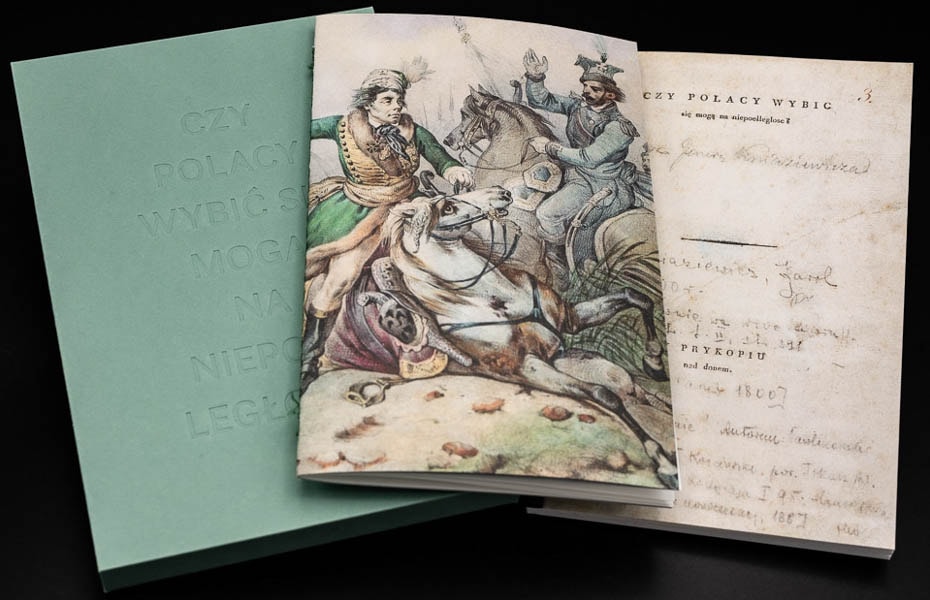 The answer to the question posed in the title of the pamphlet was sought throughout the decades of the Partitions of Poland by generations of insurrectionists, political and social activists, and artists. A definitive answer was only possible over 100 years later.

The pamphlet was first published in 1800 in Paris. Due to its conspiratorial origins, the place of publication is given as “in Prykopie on the Don” rather than Paris. In fact it was printed at Baudouin, the only printing house to have Polish fonts. Authorship was variously ascribed to the renowned Supreme Commander of the Polish National Armed Forces General Tadeusz Kościuszko, the leader of the Polish Legions General Karol Kniaziewicz, and Napoleon Bonaparte’s aide de camp Józef Sułkowski – all of which was mere speculation. It was not until the beginning of the twentieth century that historian Professor Wacław Tokarz finally established that the author was in fact Józef Pawlikowski, lawyer, Jacobin publicist, diarist of the Partitions and close collaborator and secretary of Tadeusz Kościuszko during the period of his emigration. There can be no doubt that the text was inspired by Kościuszko and his spirit, its passionate contents referring as they do to the latter’s appeal Do obywateli (“To the citizens”), proclaimed on the day the Uprising broke out in 1794: “The first step to the casting off of slavery is the risk taken to become free. The first step to victory is to know your own strength.”

The author’s answer to the question in the title of the brochure is positive, but conditional. Poles will regain independence if they create a modern nation, completely reject the system of separate estates of the realm, and include peasants in the fight. But above all they must regain their freedom acting on their own. The text of the pamphlet proper begins thus: “A nation demanding independence must, vitally, trust in its own strength. If this feeling is not present, if the nation does not strive to maintain its own existence through its own efforts but rather by relying on foreign support or grace, one may confidently predict that neither happiness, nor virtue, nor fame will ensure.”

The first edition of Pawlikowski’s patriotic manifesto was confiscated by the police for being anti-Russian, contrary to French policy at the time. Consequently only three hundred copies reached Poland. The pamphlet was popularised by its seven editions in the years 1831–1843, which however multiplied the deviations from the first edition. It was reissued twice in Warsaw during the November Uprising, printed secretly in the Ossoliński National Institute in Lwów (now Lviv, Ukraine) and later on the initiative of the Polish Democratic Society in exile. Its radical socio-political rhetorical style, lively, enthusiastic language and its optimism led to it shaping patriotic attitudes and standing patron to the numerous independence uprisings by Poles.

Only one copy of the original first edition has survived to this day, carefully kept in the Treasury of the National Library. It belonged to the Library of the Poniński Princes in Horyniec and was incorporated into the National Library in 1925 after its reactivation following independence. This copy is so valuable that it has been inscribed on UNESCO’s Memory of the World Register for Poland as a monument of collective memory and a unique object of Polish documentary heritage.

The new edition of Czy Polacy wybić się mogą na niepodległość? published by the National Library is a bibliophile edition. Its outstanding graphic design is the work of Kalina Możdżyńska. The elegant, hand-made green box featuring the embossed title contains two volumes, one an exact facsimile of the original printed copy, the other containing essays on the historical background, rhetorical style and meaning of the text, written by Professor Andrzej Nowak and Janusz Drzewucki. The digital files on which this and other publications are based form part of the Digital National Library POLONA, an invaluable resource which makes it possible to bring unique historical records back to life. The publication is Item No. 3,000,000 in POLONA (See Polona/3miliony).